I lift up my eyes to the mountains— where does my help come from? My help comes from the LORD, the Maker of heaven and earth.

How You Can Help

However, Russia did not stop there.

Despite promising not to do so, Russia began destroying civilian buildings and those who occupy them. The shelling of houses and hospitals, the deaths of civilians and children, abandoned houses and nights in cold basements - now a reality for Ukrainians. The life of every Ukrainian has changed forever.

You can help Ukrainians!
Help them survive - which will help them win. 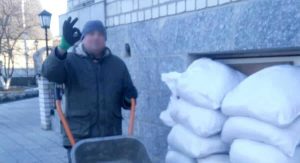 This is My Father

This is my father. And for me, he is already a Hero! 5:00 a.m. I hear about the war. Immediately called and begged my father to run! His answer: “No”. I began to cry! I cried into his phone for a long time. All those happy moments of our life together flashed before my eyes…